The Sydney investor evenings will be held at the Sydney International Convention Centre on Thursday 5 & Friday 6 March 2020. (Thursday night is now sold out)

The evening will  begin with a two-hour presentation, followed by an exclusive cocktail reception with Hamish Douglass and key members of the Magellan Investment and Distribution Teams.

There are two types of tickets available

All tickets include the formal presentation and the cocktail reception.

All monies raised from the sale of tickets will go directly to the following charities: Rural Aid, Fly High Billie, The Reach Foundation in Australia and Sweet Louise in New Zealand. 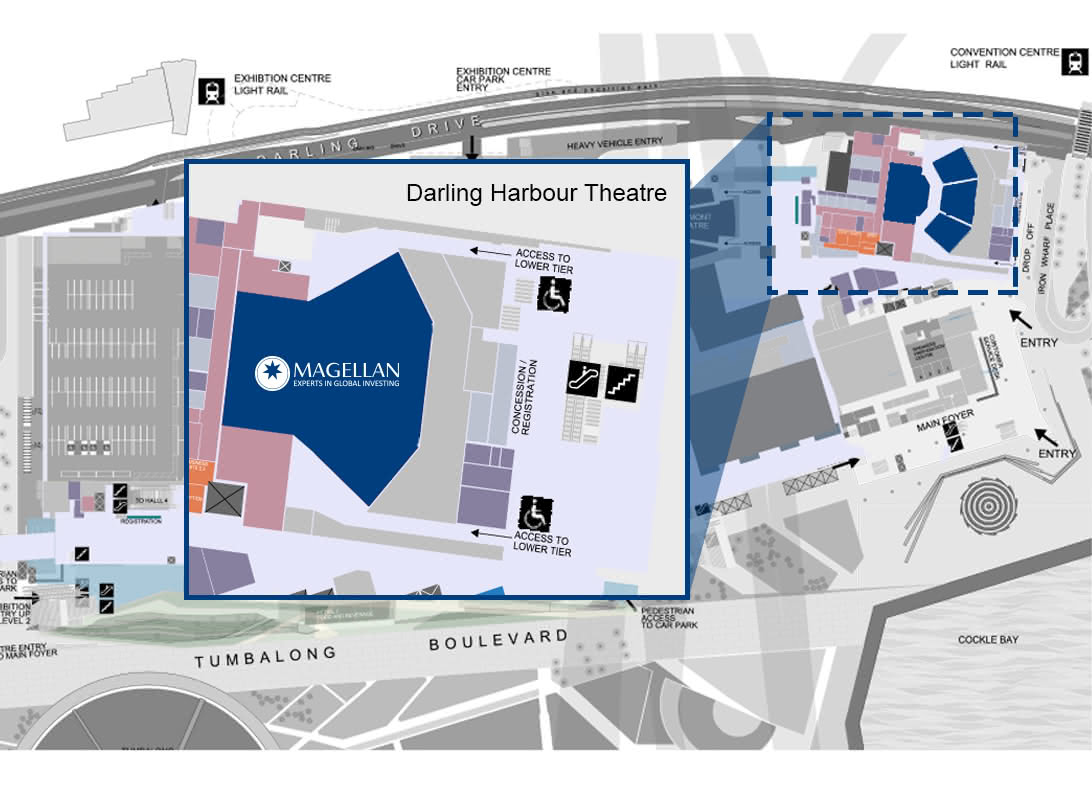 Guests are responsible for arranging their own travel and parking.

Other near by car parks:

Getting to the ICC

SYDNEY LIGHT RAIL: The Light Rail travels right through a number of Darling Harbour stations including ICC Sydney’s stops, Convention Centre and Exhibition Centre. The Light Rail starts at Central Station in the CBD and travels to Dulwich Hill in the Inner West.

TRAIN: A short walk from Central or Town Hall will take you directly to Darling Quarter, Tumbalong Park and Sydney Visitor Centre. Town Hall and Central Stations are a 10-minute walk from ICC Sydney.

BUS: ICC Sydney has its own bus stop. Bus routes 389 and 501 stop at Harris Street near Allen Street – a 10-minute walk from ICC Sydney.

WATER TAXI:  Water taxi is a great option for getting to and from Darling Harbour. Water taxi’s depart from The Rocks, Circular Quay, The Opera House and Luna Park.

TAXI AND UBER:
The best taxi and Uber drop off and pick up locations include the new Iron Wharf Place next to Harbourside Shopping Centre and Zollner Circuit on the southern end of First State Super Theatre, both accessed via Darling Drive.

The venue complies with regulations and laws governing accessibility and the rights of persons with disabilities. Some of the venue’s accessibility features include:

Please view the ICC General Conditions of Entry for details.  In addition the ICC Sydney prohibits any person from entering, or attempting to enter the Venue for the purposes of attending a Theatre, concert or entertainment event, with:

Situated in the city’s epicentre, ICC Sydney is within walking distance of multiple transport links, more than 7,000 hotel rooms, and the city’s new financial services district at Barangaroo.

ICC Sydney is also surrounded by leading universities and research institutes, as well as vibrant startup communities. Further afield, Sydney is home to bustling villages, vibrant commercial precincts, stunning parks and an abundance of native flora and fauna. Unlike anywhere else in the world, Sydney is the perfect place to start a business, learn something new or take a well-earned break.

How do I purchase tickets?
Who should I contact if I have issues with the ticketing portal?

For all technical issues with the ticketing portal please contact Eventopia - help@eventopia.co.

Please note that these may be updated as we get closer to the event.

Please note that these may be updated as we get closer to the event.